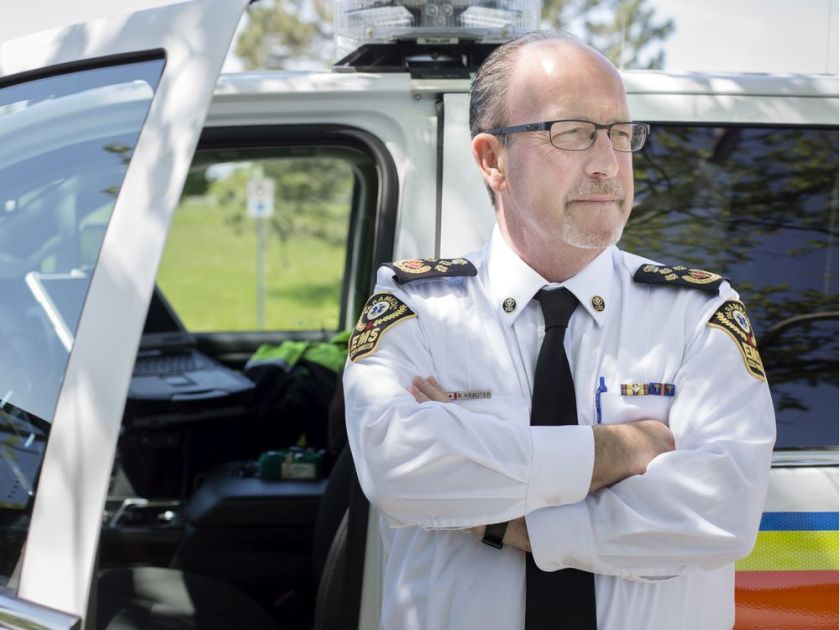 Bruce Krauter knows the trauma first responders face on the job. He lived with his own for 23 years before accepting help.

The 55-year-old chief of Essex-Windsor EMS lost a friend when an air ambulance crashed moments after take-off from Pelee Island in 1989. A decade later, he stayed on the scene of a multi-vehicle pileup on the 401 for 36 hours, watching as firefighters removed charred remains from tangled metal. In 2007, he identified the body of a paramedic who’d been ejected from an ambulance when it rolled off an icy road, then planned the man’s funeral.

“I’ve struggled with mental wellness and mental health throughout my career, Krauter said. “I didn’t want to look or appear weak. It was the culture.”

Now, he’s sharing his experiences to show first responders in his organization he’s got their backs because he’s been in their shoes — something he hasn’t always been forthright about. Only a month ago, two paramedics relayed to Krauter the thoughts of a third, who’d taken time off from work to focus on mental wellness. That person said Krauter didn’t care about mental health struggles because he didn’t understand them.

Hearing the two paramedics tell him that message “hurt right to the core,” Krauter said. He’d spoken to the individual in the past, and “knew what they were going through,” but realized he hadn’t verbalized it enough.

“As chief, I can’t always be the friend — it’s not my job,” he said. “But as the chief, I still want people to understand I know what they’re going through and I am here to support them as much as I can.”

Only after dealing with the death of 32-year-old paramedic Paul Patterson in 2007 did Krauter accept help from a psychologist. On an icy day in February, Patterson was ejected from his ambulance after losing control of it while responding to another vehicle rollover. In addition to identifying Patterson’s body and organizing a line-of-duty funeral, Krauter had to notify Patterson’s family of the accident, complete the legislative requirements of the Ministry of Labour and the Workplace Safety and Insurance Board, and debrief a room of 200 first responders about what happened to their colleague.

“The light switch went on that we’ve got to help each other, because there’s nobody else to help us out,” Krauter said “I knew that one day I would be able to make sure paramedics had the help they need, not only for physical injuries, but for mental injuries.”

In the past two years, he’s rolled out training to all Essex-Windsor EMS employees called Road to Mental Readiness (R2MR). Canada’s Department of National Defence designed the program in 2017 to train individuals in the Canadian Armed Forces on mental resilience and recovery. Two paramedics from Krauter’s organization have visited Ottawa for advanced R2MR training at Royal Canadian Mounted Police Headquarters, and used the information to train others back home, including police, firefighters and hospital staff.

Two-hour training sessions have recently been held for first responders’ friends and family, who are affected by the mental health of their loved ones.

Krauter also oversaw the creation of a peer support program at Essex-Windsor EMS, so paramedics can turn to their colleagues for help. The growing peer support team is currently comprised of 30 members able to connect people with the mental health supports they need. They also check in on coworkers after difficult emergencies, or who appear to be struggling.

He’s hoping to establish a similar program for all first responders in the area, so paramedics, police, firefighters and hospital staff who deal with the same case can reach out to one another.

“When a big occurrence happens, I’ll use the 401 accident as an example, wouldn’t it have been nice if we could have all peer supported each other during that incident,” Krauter said.
Eight people died in that 1999 pileup caused by fog. Ingrained in Krauter’s head is the image of a 14-year-old girl whose body was mostly skeleton when first responders were able to reach her. Intense heat from burning vehicles had bleached the bones.

First responders were offered counselling in the days following, but Krauter didn’t accept it then. He’s maintained contact with a psychologist since 2007, and although he does not attend formal sessions, he reaches out for help whenever he needs it.

“Hopefully I’m making a difference in someone’s life,” he said. “It’s not achieved, but I am achieving that one step at a time.

“You can’t eat an elephant in one bite,” Krauter said referring to pervasive mental health challenges in his organization and others. “I’m taking small bites out of that elephant and trying to take it away.”